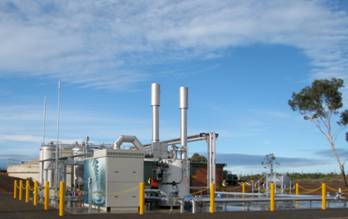 Aquatec Maxcon provided a Capstone CR200 turbine to Western Water which provides all the electrical power needed at the Surbiton Park treatment plant, along with heat to make the plant’s digesters work at optimum efficiency. The simple, elegant system likely will serve as a model for similar projects at wastewater treatment plants. The efficiency of thermal generation to supply hot water to heat the plant’s digesters will result in the production of even more biogas that can be converted to energy generation.The CR200 will produce 1.7 million kW-hours (kWh) yearly to supply the plant’s electrical power needs, using as fuel up to 100 Nm3/hr cubic meters of biogas from the plant that would have been burned away as waste. Second, an external heat exchanger installed with the micro-turbine will deliver another 2.3 million kWh of thermal energy to warm the digesters. Together, the combined heat and power produced will cut carbon dioxide emissions at the plant by 1800 tonnes per year.One Capstone CR200 MicroTurbine™ can operate efficiently with methane concentrations that range between 70 percent and 80 percent. Plant managers from Western Water predict that savings realised from the on-site generation of electrical and thermal power, plus the “green” incentives offered by the government, will justify installation of a second CR200 system in 2010 and ultimately a third one as gas demand increases.As part of the upgrade, Western Water will also implement Australia’s first microturbine co-generation facility utilising digester biogas. Biogas offers a renewable resource which will be used to generate 200kW of electricity and also 300kW of heat for improved operation of the digesters which generate the biogas. Building heating will be provided via the surplus heat ensuring that the energy is utilised extremely efficiently resulting in the maximum environmental benefits from this unique technology.